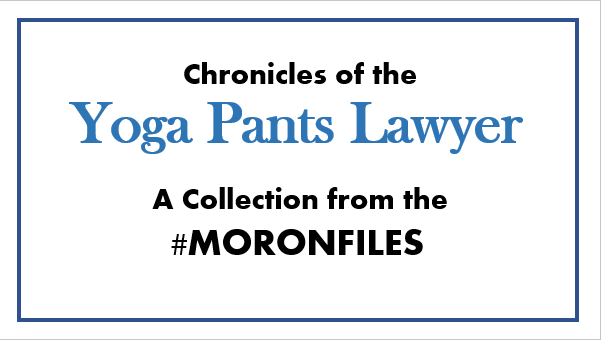 Without getting into too much detail, let’s just say that I see all kinds of crazy stuff in my line of work. Some of the things that come across my desk make me frustrated with society and you probably know that I blog about Fighting Fair on the Internet because of the things that I see.  In addition, sometimes the things that I see that frustrate me include others that are part of my profession. Like any profession, there are certain shit bags (okay, maybe they aren’t all shit bags…just most of them) out there that give us lawyers a bad reputation and quite frankly, it pisses me off.

Some things that I see warrant a full blog article – so I write those.  Others just warrant a short mention because I find the conduct both outrageous AND funny.  I’ve decided to start a collection of true stories, with some identifying facts modified so I don’t have to deal with the psychos, and will be continually adding more of those to the #MORONFILES for your reading pleasure:

It’s been a while, and there have been some probably post worthy matters that I have skipped, but THIS one warrants mention.

Normally this blog touches on people who are indeed real lawyers…and I started this thinking I was dealing with a real lawyer, after all, I see enough dumb stuff that I created this blog series off of it…but as I dug in, this almost makes more sense! Let me explain…

One of my clients received a demand letter today (a send via email in a generic word doc, no formal letterhead, nothing).  The letter alleges to be from a lawyer, with a firm name in a signature block, but sent from a Gmail account.  Let me first say, anytime I receive a letter from a lawyer, representing a client, from a Gmail account, I cringe. Dude, a domain is cheap and so is associated email.  You automatically lose credibility in my book but that’s another story for a different day.  I read through the letter (blah, blah, blah…”[s]evere legal action will be taken against you”…blah, blah, blah…”we assure you in the strongest terms” blah blah blah, we will “leave no stone unturned”…blah, blah, blah).  Okay, severe legal action? As opposed to regular legal action? Strongest terms? Leaving no stone unturned? Wait, are you Perry Mason?  No? You have Perry Mason envy don’t you?  Sigh. Who comes up with this crap? Oh, this person…

To begin with, let’s just say this is another case of some moron having no damn clue what they are talking about…all the blah blah blah is really just a bunch of lame bullshit they probably read somewhere online and thought it might apply to their “client’s” situation when it doesn’t.  Not even a little bit.  That Google law degree isn’t working so well for ya pal.  What’s even more funny…the person appears to be a total fraud!

So wondering what kind of ding dong would write this kind of stuff I start researching.  The state this person purports to be an attorney in has, like many states, a mandatory state bar registry.  Guess what?  Not listed in the registry.  Look up the LLC that is the alleged firm name on the Corporation Commission records…yeah, entity doesn’t exist.  Look up the address – it might be an apartment (which to be clear, thanks to technology, there are a ton of home based attorneys and there is nothing wrong with that at all – it’s a great way to go!) but in this case it added to the suspicion. Icing on this shit cake – looked into the name provided – court records for recent arrests for a person with that very unique name.  Could there be others named the same living in the same area? Possibly…but given everything else, I sort of doubt it.  Either this is a really shoddy attorney or a person who really sucks at pretending to be an attorney.

There are enough bad lawyers out there…what’s worse is bad people, who are not lawyers but pretending to be lawyers, holding themselves out as such.  By the way such conduct is called the unauthorized (or unlicensed) practice of law and is typically considered a crime.  So indeed, this one makes the #MORONFILES!

UPDATE: This person got turned into the State Bar for Unauthorized Practice of Law and had to sign a document affirming they would stop their ways.  Nope…not a lawyer…and got busted for pretending to be one.  Yeah, that stopped that bullshit in a hurry.